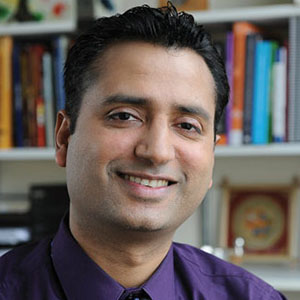 Fighting disinformation and fake news: The role of the library and beyond

In the last few years, we have heard the terms fake news, disinformation, misinformation, etc. repeatedly. Yet, we do not clearly know how to be better informed, fight this phenomenon, or to train people in combating it. With a vast majority of population relatively new to technology, and not trained in any formal way to decipher the real from unreal, truth from half-truths and lies, people actually end up believing disinformation as truth, especially when there is enough repetition. In this talk, I will describe the phenomenon and its implications, the current efforts and their degree of success, and provide directions for information professionals to fight disinformation and fake news.

Naresh Agarwal is an Associate Professor at the School of Library & Information Science at Simmons University, Boston, Massachusetts, USA. Naresh’s research area is information behavior and knowledge management. His recent book ‘Exploring Context in Information Behavior: Seeker, situation, surroundings, and shared identities’ was published by Morgan & Claypool. Naresh looks at the way people look for information and the contextual factors that impact their choice of information sources. He seeks to understand and synthesize the apparent contradictions in this phenomenon and tries to reconcile multiple perspectives. Naresh also studies serendipitous information encountering and the causes and effects — both on the recipient and the sender — of information avoidance behaviors, especially by people who call and text using smartphones and social media. He is investigating the phenonomenon of disinformation, and the role that information professionals can play in encouraging critical thinking. He has been a keynote/invited speaker at workshops and conferences in different countries, including in the U.S., Japan, France, Pakistan, and Bangladesh. Naresh has held various leadership positions at the Association for Information Science and Technology (ASIS&T). He was a member of its Board of Directors, Co-Chaired its Annual Meeting in 2017, and was awarded the ASIS&T James M. Cretsos Leadership Award in 2012. You can learn more about him at http://web.simmons.edu/~agarwal.